"Our little angel went back to heaven. Although Kennedy's stay on Earth seemed just a fleeting moment in time, our loving memories of her will last forever." 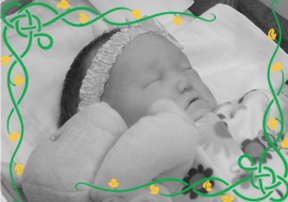 Kenney Morgan Dunn was born October 15, 2009. She arrived a few weeks early with reddish brown hair, fair complexion, a cute little button nose and dad’s chin. Even though she only weighed 5.38 pounds, she was physically strong as she demonstrated by constantly trying to pull out her tubes and lines while she was in to St. Joseph’s Hospital and Medical Center Neonatal Intensive Care unit (NICU).

Kennedy was diagnosed with hydrocephalus (fluid buildup in the brain) during second trimester of pregnancy. Right after discovery of her condition, her care was transferred to St. Joseph’s Hospital and Medical Center Perinatology unit. During the course of pregnancy, her heart was thoroughly examined to be healthy and her hydrocephalus was considered mild-moderate condition. We were further reliefed after we met with a leading expert of hydrocephalus and were told that her condition seemed manageable based on her MRI results.

Kennedy experienced respiratory distress seconds after birth. After letting out two cries, she was intubated and transferred immediately to NICU. The day after her birth, we were informed that her condition was worse than we thought. She had multiple malformations pointing to a genetic deficiency disease. Days later we learned she was blind in both eyes, her cute button nose was providing a very small airway, questionable diaphragm function, she was not tolerating milk and her head showed hydrocephalus and choroid plexus cysts (fluid filled space in part of brain that makes fluid which protects and nourishes the brain and spinal cord).

On October 23, 2009 the chromosome study result arrived and it confirmed that Kennedy was indeed suffering from a rare condition classified as terminal deletion of chromosome 7. The missing tip of this chromosome has been shown to be associated with many malformations as seen in Kennedy. Her brain was not full of fluid buildup but instead her brain was not fully developed. She most likely would have never been able to breathe on her own. Outlook was extremely grim and full of unknown.

We said goodbye to Kennedy on October 24, 2009. She was surrounded by loving family members.

We are not sure whether her genetic defect could have been detected early on in the pregnancy due to its rarity and even if anything could have been done or the outcome changed. We are very grateful for the 10 days we had with Kennedy and she will always be in our hearts.